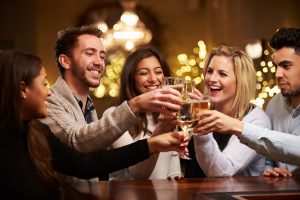 Drinking alcohol is part of everyday life in many circles.

Occasional happy hours and watching sports with friends often involve having a few alcoholic beverages. Holidays typically include special dinners with wine and so forth.  And enjoying alcohol with meals and beer while watching TV can be commonplace as well.

The U.S. Government dietary guidelines notes that alcohol can be consumed in moderation – defined as one drink a day for woman and two drinks a day for men.  But depending on which study is viewed, even so-called modest drinking can be suspect.

For example, a study of brain scans by researchers in a BMJ (British Medical Journal) report noted that moderate drinking over 30-plus years was associated with degeneration and shrinking of the hippocampus, a region of the brain involved in memory and navigation as well as degeneration of the brain’s white matter.

On the other hand, some information suggests potential benefits, such as references to links of moderate red wine consumption to fewer heart attacks. There seems to be indications that antioxidants in red wine, such as flavonoids and a substance called resveratrol, have heart-healthy benefits. However, encouraging people to drink for this reason is not universally accepted, especially without research about prevalence of alcoholism in a person’s family.

Along with this information, the manual warns that 75 percent of people who develop substance use disorder (SUD) do so by age 27, and notes that alcohol use disorders are almost three times as common as drug use disorders. With this information in mind, it is a good idea to monitor alcohol levels as one begins to enter the adult world of drinking and, of course, at any age when drinking habits become elevated.

When is help needed

When the ability to function appropriately and carry on life’s responsibilities lapses, it may be time for intervention. The Rapid Alcohol Problems Screen (RAPS4) is one common screening measure.

The screen consists of four questions:

A yes to at least one of these questions suggest that alcohol consumption has become harmful to the person’s physical and mental health.

With treatment there are many options, such as individual and group counseling, inpatient and residential treatment, intensive outpatient treatment, partial hospital programs, case or care management, MAT (Medication Assisted Treatment), IRT (Intensive Residential Treatment), recovery support services, 12-step fellowship and peer supports. And keep in mind, it sometimes takes more than one attempt for those experiencing alcoholism to secure a road to recovery.

Practice moderation, but also know that for some people abstinence from alcohol is the path to a healthful lifestyle. If you have a substance use disorder (SUD) or mental health concern about yourself or one of your loved ones, we are glad to consult with you. To get more information about our metro Denver mental health centers visit communityreachcenter.org or call 303-853-3500. We have centers in the northside Denver metro area including the cities of Thornton, Westminster, Northglenn, Commerce City and Brighton.